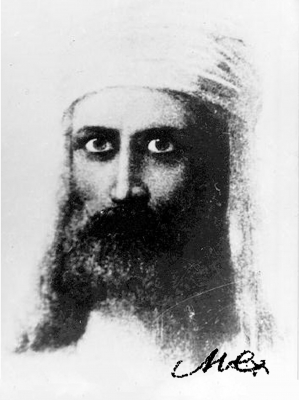 The Master Morya - Who is one of the best known of the Eastern adepts, and Who numbers amongst His pupils a large number of Europeans and Americans, is a Rajput Prince, and for many decades held an authoritative position in Indian affairs. He works in close co-operation with the Manu, and will Himself eventually hold office as the Manu of the sixth root-race. He dwells, as does His Brother, the Master K. H., at Shigatse in the Himalayas, and is a well-known figure to the inhabitants of that far-away village. He is a man of tall and commanding presence, dark hair and beard and dark eyes, and might be considered stern were it not for the expression that lies in His eyes. He and His Brother, the Master K. H., work almost as a unit, and have done so for many centuries and will, on into the future, for the Master K. H. is in line for the office of World Teacher when the present holder of that office vacates it for higher work, and the sixth root-race comes into being. The houses in which They both dwell are close together, and much of Their time is spent in the closest association. As the Master M. is upon the first Ray, that of Will or Power, His work largely concerns itself with the carrying out of the plans of the present Manu. He acts as the Inspirer of the statesmen of the world, He manipulates forces, through the Mahachohan, that will bring about the conditions desired for the furthering of racial evolution. On the physical plane those great national executives [Page 55] who have far vision and the international ideal are influenced by Him, and with Him co-operate certain of the great devas of the mental plane, and three great groups of angels work with Him on mental levels, in connection with the lesser devas who vitalise thoughtforms, and thus keep alive the thoughtforms of the Guides of the race for the benefit of the whole of humanity.

The Master M. has a large body of pupils under His instruction, and works in connection with many organisations of an esoteric and occult kind, as well as through the politicians and statemen of the world.

"Initiation, human and Solar" via Alice A. Bailey (The Tibetan)