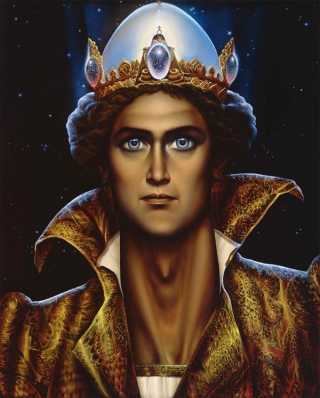 In the middle of the Lemurian epoch, approximately eighteen million years ago, occurred a great event which signified, among other things, the following developments:—The Planetary Logos of our earth scheme, one of the Seven Spirits before the throne, took physical incarnation, and, under the form of Sanat Kumara, the Ancient of Days, and the Lord of the World, came down to this dense physical planet and has remained with us ever since. Owing to the extreme purity of His nature, and the fact that He is (from the human standpoint) relatively sinless, and hence incapable of response to aught on the dense physical plane, He was unable to take a dense physical body such as ours, and has to function in His etheric body. He is the greatest of all the Avatars, or Coming Ones, for He is a direct reflection of that great Entity who lives, and breathes, and functions through all the evolutions on this planet, holding all within His aura or magnetic sphere of influence. In Him we live and move and have our being, and none of us can pass beyond the radius of His aura. He is the Great Sacrifice, Who left the glory of the high places and for the sake of [Page 29] the evolving sons of men took upon Himself a physical form and was made in the likeness of man. He is the Silent Watcher, as far as our immediate humanity is concerned, although literally the Planetary Logos Himself, on the higher plane of consciousness whereon He functions, is the true Silent Watcher where the planetary scheme is concerned. Perhaps it might be stated thus:—That the Lord of the World, the One Initiator, holds the same place in connection with the Planetary Logos as the physical manifestation of a Master holds to that Master's Monad on the monadic plane. In both cases the intermediate state of consciousness has been superseded, that of the Ego or higher self, and that which we see and know is the direct self-created manifestation of pure spirit itself. Hence the sacrifice. It must here be borne in mind that in the case of Sanat Kumara there is a tremendous difference in degree, for His point in evolution is as far in advance of that of an adept as that adept's is in advance of animal man.

Dictionary of personalities -- The Great Initiates, Mahatmas, Masters Of Wisdom
-- The Masters of the Hierarchy
<< Rakoczi, The Master
•   Sanat Kumara
>> Serapis, The Master
Tags:
Sanat Kumara