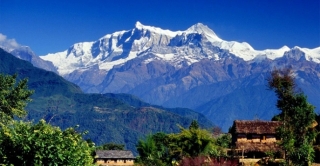 The Manu presides over group one. He is called Vaivasvata Manu, and is the Manu of the fifth root-race. He is the ideal man or thinker, and sets the type for our Aryan race, having presided over its destinies since its inception nearly one hundred thousand years ago. Other Manus have come and gone and His place will be, in the relatively near future, taken by someone else. He will then pass on to other work of a more exalted kind. The Manu, or the prototype of the fourth root-race, works in close co-operation with Him, and has His centre of influence in China. He is the second Manu that the fourth root-race has had, having taken the place of the earlier Manu at the time of the final stages of Atlantean destruction. He has remained to foster the development of the race type, and to bring about its final disappearance. The periods of office of all the Manus overlap, but there remains no representative of the third root-race upon the globe at this time. Vaivasvata Manu has His dwelling place in the Himalaya mountains, and has gathered around Him at Shigatse some of those immediately connected with Aryan affairs in India, Europe and America, and those who will later be concerned with the coming sixth root-race. The plans are prepared for ages ahead, centres of energy are formed thousands of years before they will be required, and in the wise fore-knowledge of these Divine Men nothing is left to sudden eventuation, but all moves in ordered cycles and under rule and law, though within karmic limitations.

The work of the Manu is largely concerned with government, with planetary politics, and with the founding, direction, and dissolution of racial types and forms. To Him is committed the will and purpose of the Planetary Logos. He knows what is the immediate objective for this cycle of evolution over which He has to preside, and His work concerns itself with making that will an accomplished fact. He works in closer co-operation with the building devas than does His Brother, the Christ, for to Him is given the work of setting the race type, of segregating the groups out of which races will develop, of manipulating the forces which move the earth's crust, of raising and lowering continents, of directing the minds of statesmen everywhere so that racial government will proceed as desired, and conditions be brought about which will produce those needed for the fostering of any particular type. Such a work can now be seen demonstrating in North America and Australia.

The energy which flows through Him emanates from the head centre of the Planetary Logos, passing to Him through the brain of Sanat Kumara, Who focalises all the planetary energy within Himself. He works by the means of a dynamic meditation, conducted within the head centre, and produces His results through His perfect realisation of that which has to be accomplished, through a power to visualise that which must be done to bring about accomplishment, and through a capacity to transmit creative and destructive energy to those who are His assistants. And all this is brought about through the power of the enunciated sound.