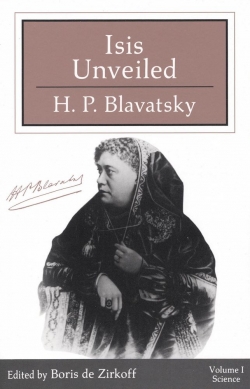 
“SOME time ago, a Theosophist, Mr. R----, was traveling by rail with an American gentleman, who told him how surprised he had been by his visit to our London Headquarters. He said that he had asked Mme. Blavatsky what were the best Theosophical works for him to read, and had declared his intention of procuring Isis Unveiled, when to his astonishment she replied, "Don't read it, it is all trash."

Now I did not say "trash" so far as I remember; but what I did say in substance was: "Leave it alone; Isis will not satisfy you. Of all the books I have put my name to, this particular one is, in literary arrangement, the worst and most confused." And I might have added with as much truth that, carefully analysed from a strictly literary and critical standpoint, Isis was full of misprints and misquotations; that it contained useless repetitions, most irritating digressions, and to the casual reader unfamiliar with the various aspects of metaphysical ideas and symbols, as many apparent contradictions; that much of the matter in it ought not to be there at all, and also that it had some very gross mistakes due to the many alterations in proof-reading in general, and word corrections in particular. Finally, that the work, for reasons that will be now explained, has no system in it; and that it looks in truth, as remarked by a friend, as if a mass of independent paragraphs having no connection with each other, had been well shaken up in a waste-basket, and then taken out at random and -- published.

Such is also now my sincere opinion. The full consciousness of this sad truth dawned upon me when, for the first time after its publication in 1877, I read the work through from the first to the last page, in India in 1881. And from that date to the present, I have never ceased to say what I thought of it, and to give my honest opinion of Isis whenever I had an opportunity for so doing. This was done to the great disgust of some, who warned me that I was spoiling its sale; but as my chief object in writing it was neither personal fame nor gain, but something far higher, I cared little for such warnings. For more than ten years this unfortunate "masterpiece," this "monumental work," as some reviews have called it, with its hideous metamorphoses of one word into another, thereby entirely transforming the meaning,* with its misprints and wrong quotation-marks, has given me more anxiety and trouble than anything else during a long life-time which has ever been more full of thorns than of roses.

But in spite of these perhaps too great admissions, I maintain that Isis Unveiled contains a mass of original and never hitherto divulged information on occult subjects. That this is so, is proved by the fact that the work has been fully appreciated by all those who have been intelligent enough to discern the kernel, and pay little attention to the shell, to give the preference to the idea and not to the form, regardless of its minor shortcomings. Prepared to take upon myself -- vicariously as I will show -- the sins of all the external, purely literary defects of the work, I defend the ideas and teachings in it, with no fear of being charged with conceit, since neither ideas nor teaching are mine, as I have always declared; and I maintain that both are of the greatest value to mystics and students of Theosophy.”

* Witness the word 'planet' for 'cycle' as originally written, corrected by some unknown hand (Vol. I, p. 347, 2nd par.), a 'correction' which shows Buddha teaching that there is no rebirth on this planet (!!) when the contrary is asserted on p. 346, and the Lord Buddha is said to teach how to 'avoid' reincarnation; the use of the word 'planet' for plane, of 'Monas' for Manas; and the sense of whole ideas sacrificed to the grammatical form, and changed by the substitution of wrong words and erroneous punctuation, etc., etc., etc.