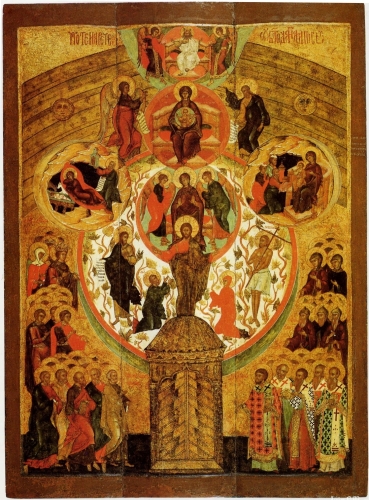 Click on the picture to see it in the best quality.

Icon of the virgin "What's Ya name"

Literary source of the iconography of the icon of the Theotokos appeared to chant 1 hour: "What to call Thee, o full of grace." Like other such hymnographic compositions (see cat. 9, 10, 51), this is based on a combination of traditional iconographic formulae. Every epithet of the hymn corresponds to a specific image. But the meaning of the composition is not limited to the text of the prayer. In General, the composition is an illustration of the theme of service to the mother of God to the dispensation of God for the salvation of man. The time of appearance of this iconography should be attributed to the XVI century at the Bottom of the composition are represented the saints - apostles, martyrs (left), Holy hierarchs, Reverend husbands and wives (right), those who praise the mother of God. In singing it is called heaven because the birth of Christ"the sun of righteousness" (at the top shows the seven heavenly spheres with the stars, the sun and the moon), "Paradise", since "probable bloom of incorruptibility" of Christ who saved man from mortal decay (in the pastures of heaven is a figure of Christ, Adam and eve, the Wise Thief, John the Baptist), "Virgin", since and after birth preserved her virginity ("Christmas"), "Mother", because "had the saints on the arms of" God ("the adoration of the Magi"). In the centre are the virgin in the radiant mandorla on a throne. She is depicted with her head bowed in a sign of prayer ("pray to save our souls"), addressed to the Saviour, who blesses the forthcoming two hands. Above the mandorla with the mother of God of the Sign, flanked by the angel and the prophet Isaiah pointing to the virgin (see cat. 11). The composition is completed with the image of the Lord of hosts in the mandorla, complement its gate is and Culminates a symbol of the virgin Mary, and the "door of salvation", as was called Mary, through which the world came the Savior.