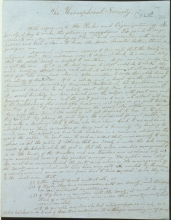 With reference to the Rules and Organization of the Society, I beg to make the following suggestions. The points I urge, appear to me very necessary as I have had conversation with many Natives and have a claim to know the Hindu character better than a foreigner can.

A general impression appears to prevail that the Society is a religious sect. This impression owes its origin, I think, to a common belief that the whole Society is devoted to Occultism. As far as I can judge, this is not the case. If it is, the best course to adopt would be to make the entire Society a secret one, and shut its doors against all except those very few who may have shown a determination to devote their whole lives to the study of Occultism. If it is not so, and is based upon the broad Humanitarian principle of Universal Brotherhood, let Occultism, one of its several Branches, be an entirely secret study. From time immemorial this sacred knowledge has been guarded from the vulgar with great care, and because a few of us have had the great fortune to come into contact with some of the custodians of this invaluable treasure, is it right on our part to take advantage of their kindness and vulgarize the secrets they esteem more sacred than even their lives? The world is not yet prepared to hear truth about this subject. By placing the facts before the unprepared general public, we only make a laughing stock of those who have been kind to us and have accepted us as their co-workers for doing good to humanity. By harping too much upon this subject, we have made ourselves in a measure odious in the eyes of the public. We went even to such an extent that, unconsciously to ourselves, we led the public to believe that our Society is under the sole management of the Adepts, while the fact is that the entire executive management is in the hands of the Founders, and our Teachers give us advice only in rare exceptional cases of the greatest emergency. The public saw that they must have misapprehended the facts, since errors in the Management of the Society — some of which could have been very well avoided by the exercise of ordinary common sense — were from time to time exposed. Hence they came to the conclusion that

(1) Either Adepts do not exist at all; or

(2) If they do, they have no connection with our Society, and therefore we are dishonest impostors; or

(3) If they have any connection with the Society, it must be only those of a very low degree, since, under their management, such errors occurred.

With the few noble exceptions who had entire confidence in us, our Native Members came to one of these three conclusions. It is therefore necessary in my opinion 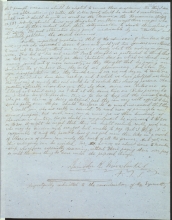