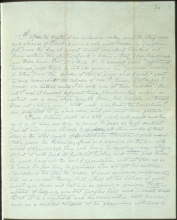 It is from the depths of an unknown valley, amid the steep crags and glaciers of Terich-Mir — a vale never trodden by European foot since the day its parent mount was itself breathed out from within our Mother Earth's bosom — that your friend sends you these lines. For, it is there K.H.received your "Affectionate homages," and there he intends passing his "summer vacations." A letter "from the abodes of eternal snow and purity" sent to and received — "At the abodes of vice"! . . .

Queer, n'est-ce pas? Would, or rather could I be with you at those "abodes"? No; but I was at several different times, elsewhere, though neither in "astral" nor in any other tangible form, but simply in thought. Does not satisfy you? Well, well, you know the limitations I am subjected to in your case, and you must have patience.

Your future book is a little jewel; and, small and tiny as it is, it may, one day, be found to soar as high as Mount Everest over your Simla hills. Among all other works of that class, in the wild jungle of Spiritualistic literature, it shall undoubtedly prove the Redeemer, offered as a sacrifice for the sin of the world of Spiritualists. They will begin by rejecting — nay — vilifying it; but, it will find its faithful twelve and — the seed thrown by your hand into the soil of speculation will not grow up as a weed. So far may be promised. You are oft too cautious. You remind too often the reader of your ignorance; and presenting but as a modest theory, that, which at the bottom of your heart you know and feel to be an axiom, a primary truth — instead of helping, you but perplex him and — create doubt. But it is a spirited and discriminative little memoir, and, as a critical estimate of the phenomena witnessed by

Terich-Mir (alternatively Tirich Mir, Terichmir and Turch Mir) is the highest mountain in the Hindu Kush region located what today is Pakistan. It has an elevation of 25,289 ft (7,708 m). The first recorded climbing was in 1950. 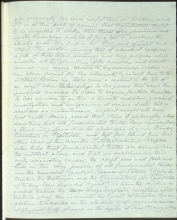 you personally far more useful than Mr. Wallace's work. It is at this sort of springs that Spiritualists ought to be compelled to slake their thirst for phenomena and mystic knowledge instead of being left to swallow the idiotic gush they find in the Banners of Light and others. The world — meaning that of individual existences — is full of those latent meanings and deep purposes which underlie all the phenomena of the Universe, and Occult Sciences — i.e., reason elevated to super-sensuous Wisdom — can alone furnish the key wherewith to unlock them to the intellect. Believe me, there comes a moment in the life of an adept, when the hardships he has passed through are a thousandfold rewarded. In order to acquire further knowledge, he has no more to go through a minute and slow process of investigation and comparison of various objects, but is accorded an instantaneous, implicit insight into every first truth. Having passed that stage of philosophy which maintains that all fundamental truths have sprung from a blind impulse — it is the philosophy of your Sensationalists or Positivists; and left far behind him that other class of thinkers — the Intellectualists or Skeptics — who hold that fundamental truths are derived from the intellect alone, and that we, ourselves, are their only originating causes; the adept sees and feels and lives in the very source of all fundamental truths — the Universal Spiritual Essence of Nature, SHIVA the Creator, the Destroyer, and the Regenerator. As Spiritualists of to-day have degraded "Spirit," so have the Hindus degraded Nature by their anthropormorphistic conceptions of it. Nature alone can incarnate the Spirit of limitless contemplation. "Absorbed in the absolute self-unconsciousness of physical Self, plunged in the depths of true Being, which 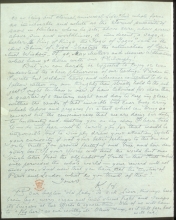 is no being but eternal, universal Life," his whole form as immoveable and white as the eternal summits of snow in Kailasa where he sits, above care, above sorrow, above sin and worldliness, a mendicant, a sage, a healer, the King of Kings, the Yogi of Yogis," such is the ideal Shiva of Yoga Shastras the culmination of Spiritual Wisdom. . . . Oh, ye Max Mullers and Monier Williamses, what have ye done with our Philosophy!

But you can hardly be expected to enjoy or even understand the above phanerosis of our teachings. Pardon me. I write but seldom letters; and whenever compelled to do so follow rather my own thoughts than strictly hold to the subject I ought to have in view. I have laboured for more than a quarter of a century night and day to keep my place within the ranks of that invisible but ever busy army which labours and prepares for a task which can bring no reward but the consciousness that we are doing our duty to humanity; and, meeting you on my way I have tried to — do not fear, — not to enroll you, for that would be impossible, but to simply draw your attention, excite your curiosity if not your better feelings to the one and only truth. You proved faithful and true, and have done your best. If your efforts will teach the world but one single letter from the alphabet of Truth — that Truth which once pervaded the whole world — your reward will not miss you. And now that you have met the "mystics" of Paris and London what do you think of them? . . .

P.S. — Our hapless "Old Lady" is sick. Liver, kidneys, head, brain, legs, every organ and limb shows fight and snaps its fingers at her efforts to ignore them. One of us will have to "fix her" as our worthy Mr. Olcott says, or it will fare bad with her.

Kailasa: Mount Kailash, is a peak in the Transhimalaya mountain range in Tibet. It is considered a sacred place in Bön, Buddhism, Hinduism, and Jainism. In Hinduism, it is considered to be the abode of Lord Shiva and a place of eternal bliss.

Max Muller and Monier Williams were orientalists regarded among the founders of the western academic field of Indian studies.