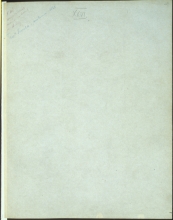 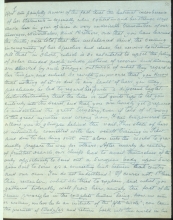 I am painfully aware of the fact that the habitual incoherence of her statements — especially when excited — and her strange ways make her in your opinion a very undesirable transmitter of our messages. Nevertheless, kind Brothers, once that you have learned the truth; once told, that this unbalanced mind, the seeming incongruity of her speeches and ideas, her nervous excitement, all that in short, which is so calculated to upset the feelings of sober minded people, whose notions of reserve and manners are shocked by such strange outbursts of what they regard as her temper, and which so revolt you, — once that you know that nothing of it is due to any fault of hers, you may, perchance, be led to regard her in quite a different light. Notwithstanding that the time is not quite ripe to let you entirely into the secret; and that you are hardly yet prepared to understand the great Mystery, even if told of it, owing to the great injustice and wrong done, I am empowered to allow you a glimpse behind the veil. This state of hers is intimately connected with her occult training in Tibet, and due to her being sent out alone into the world to gradually prepare the way for others. After nearly a century of fruitless search, our chiefs had to avail themselves of the only opportunity to send out a European body upon European soil to serve as a connecting link between that country and our own. You do not understand? Of course not. Please then, remember, what she tried to explain, and what you gathered tolerably well from her, namely the fact of the seven principles in the complete human being. Now, no man or woman, unless he be an initiate of the "fifth circle," can leave the precincts of Bod-Las and return back into the world in his

Top left of page shows an equilateral cross with four dots. In Sanskrit this could be a form of Swastika, but it also resembles an alchemical symbol for distilled vinegar, or a Jerusalem cross. 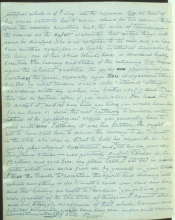 integral whole — if I may use the expression. One, at least of his seven satellites has to remain behind for two reasons: the first to form the necessary connecting link, the wire of transmission — the second as the safest warranter that certain things will never be divulged. She is no exception to the rule, and you have seen another exemplar — a highly intellectual man — who had to leave one of his skins behind; hence, is considered highly eccentric. The bearing and status of the remaining six depend upon the inherent qualities, the psycho-physiological peculiarities of the person, especially upon the idiosyncracies transmitted by what modern science calls "atavism." Acting in accordance with my wishes, my brother M. made to you through her a certain offer, if you remember. You had but to accept it, and at any time you liked, you would have had for an hour or more, the real baitchooly to converse with, instead of the psychological cripple you generally have to deal with now. Yesterday it was his mistake. He ought not to have sent her to deliver the message to Mr. Sinnett in the state she was in. But to hold her responsible for her purely physiological excitement, and to let her see your contemptuous smiles — was positively sinful. Pardon me, my Brothers and good Sirs, my plain talk. I act but in accord with what was asked from me by yourself in your letter. I took the trouble to "ascertain the spirit and meaning" with which everything in Mr. Sinnett's room was said and done; and though having no right to "condemn" you — since you were ignorant of the true state of things — I cannot otherwise but strongly disapprove of that, which, however much polished outwardly would have been even under quite ordinary circumstances — Cruelty still. Buss!

atavism is the reappearance of a characteristic in an organism after several generations of absence.

Buss is an expression used by the Master that means "enough (for now)".