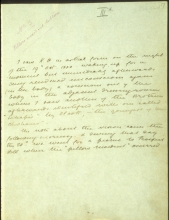 I saw K.H. in astral form on the night of 19th of October, 1880, — waking up for a moment but immediately afterwards being rendered unconscious again (in the body) and conscious out of the body in the adjacent dressing-room where I saw another of the Brothers afterwards identified with one called "Serapis" by Olcott, — "the youngest of the chohans."

The note about the vision came the following morning, and during that day, the 20th, we went for a picnic to Prospect Hill, when the "pillow incident" occurred.

The "pillow incident" refers to a phenomenon in which Mrs. Sinnett's brooch was materialized inside a pillow.

In dreams and visions at least, when rightly interpreted there can hardly be an "element of doubt." . . . . I hope to prove to you my presence near you last night by something I took away with me. Your lady will receive it back on the Hill. I keep no pink paper to write upon, but I trust modest white will do as well for what I have to say.

"Something I took away with me" refers to Mrs. Sinnett's brooch, which was materialized the next day.