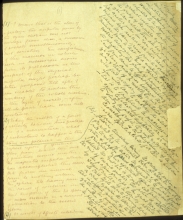 (1) I conceive that at the close of a pralaya the impulse given by the Dhyan Chohans does not develop from chaos, a succession of worlds simultaneously, but seriatim. The comprehension of the manner in which each in succession ensues from its predecessor as the impact of the original impulse might perhaps be better postponed till after I am enabled to realize the working of the whole machine — the cycle of worlds — after all its parts have come into existence.

(1) Correctly conceived. Nothing in nature springs into existence suddenly, all being subjected to the same law of gradual evolution. Realize but once the process of the maha cycle, of one sphere and you have realized them all. One man is born like another man, one race evolves, develops, and declines like another and all other races. Nature follows the same groove from the “creation” of a universe down to that of a mosquito. In studying esoteric cosmogony, keep a spiritual eye upon the physiological process of human birth; proceed from cause to effect establishing as you go along, analogies between the birth of a man and that of a world. In our doctrine you will find necessary the synthetic method; you will have to embrace the whole [as a one] — that is to say to blend the macrocosm and microcosm together — before you are enabled to study the parts separately or analyze them with profit to your understanding. Cosmology is the physiology of the universe spiritualized, for there is but one law.

(2) Taking the middle of a period of activity between two pralayas, i.e., of a manvantara — what I understand to happen is this. Atoms are polarized in the highest region of spiritual efflux from behind the veil of primitive cosmic matter. The magnetic impulse which has accomplished this result flits from one mineral form to another within the first sphere till having run the round of existence in that kingdom of the first sphere it descends in a current of attraction to the second sphere.

NOTE: The next 5 words from "Do" to "intervene" at the bottom of the letter's left column have been placed in the Page 2 text as the beginning of question 3.

(2) Polarize themselves during the process of motion and propelled by the irresistible Force at work. In Cosmogony and the work of nature the positive and the negative or the active and passive forces correspond to the male and female principles. Your “spiritual efflux” comes not from “behind the veil” but is the male seed falling into the veil of cosmic matter. The active is attracted by the passive principle and the Great Nag, the serpent emblem of the eternity, attracts its tail to its mouth forming thereby a circle (cycles in the eternity) in that incessant pursuit of the negative by the positive. Hence the emblem of the lingam, the phallus and the cteis. The one and chief attribute

cosmogony refers to a scientific theory concerning the origin of the cosmos or universe, or about how "reality" came to be.

seriatim is Latin for "point by point."

efflux refers to the physics concept of flow.