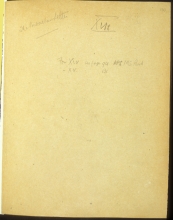 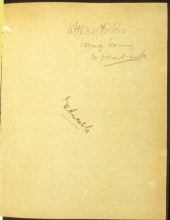 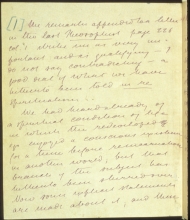 (1) The remarks appended to a letter in the last Theosophist, page 226, Col. 1, strike me as very important and as qualifying — I do not say contradicting — a good deal of what we have hitherto been told in re Spiritualism.

We had heard already of a spiritual condition of life in which the redeveloped Ego enjoyed a conscious existence for a time before reincarnation in another world; but that branch of the subject has hitherto been slurred over. Now some explicit statements are made about it; and these In the Deva Chan (I have lent my Theosophist to a friend; and have not got it at hand to refer to but that if I remember rightly is the name given to the state of spiritual beatitude described) the new Ego retains complete recollection of his life on earth apparently. Is that so or is there any misunderstanding on that point on my part? 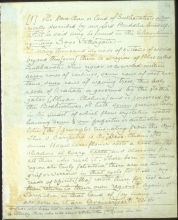 (1) The Deva-Chan, or land of "Sukhavati," is allegorically described by our Lord Buddha himself. What he said may be found in the Shan-Mun-yi-Tung. Says Tathagata: —

"Many thousand myriads of systems of worlds beyond this (ours) there is a region of Bliss called Sukhavati . . . . This region is encircled within seven rows of railings, seven rows of vast curtains, seven rows of waving trees; this holy abode of Arahats is governed by the Tathagatas (Dhyan Chohans) and is possessed by the Bodhisatwas. It hath seven precious lakes, in the midst of which flow crystaline waters having 'seven and one' properties, or distinctive qualities (the 7 principles emanating from the ONE). This, O, Sariputra is the 'Deva Chan.' Its divine Udarnbara flower casts a root in the shadow of every earth, and blossoms for all those who reach it. Those born in the blessed region are truly felicitous, there are no more griefs or sorrows in that cycle for them. . . . Myriads of Spirits (Lha) resort there for rest and then return to their own regions. (*) Again, O, Sariputra, in that land of joy many who are born in it are Avaivartyas (†) . . . etc., etc.

(*) Those who have not ended their earth rings.

(†) Literally — those who will never return — the seventh round men, etc.

The text Shan-Mun-yi-Tung has not been identified. However, the smaller Sukhavativyuha Sutra presents a similar quote to the one given by the Mahatma. Tradition says that there were three Chinese translations of this sutra, though only two remain: the Amituo jing(by Kumarajiva) and the Cheng-tsan ching-t'u-fo she-shou ching. 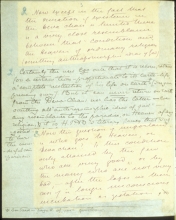 (2) Now except in the fact that the duration of existence in the Deva Chan is limited, there is a very close resemblance between that condition and the Heaven of ordinary religion (omitting anthropomorphic ideas of God).

(2) Certainly the new Ego once that it is reborn, retains for a certain time — proportionate to its Earth-life, a "complete recollection of his life on earth." (*) (See your preceding query.) But it can never return on earth, from the Deva Chan, nor has the latter — even omitting all "anthropomorphic ideas of God" — any resemblance to the paradise or heaven of any religion, and it is H.P.B.'s literary fancy that suggested to her the wonderful comparison.

(3) Now the question of importance — is who goes to Heaven — or Deva Chan? Is this condition only attained by the few who are very good, or by the many who are not very bad, — after the lapse in their case of a longer unconscious incubation or gestation. 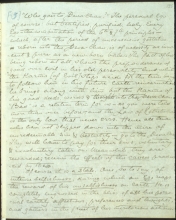 (3) "Who goes to Deva Chan?" The personal Ego of course, but beatified, purified, holy. Every Ego — the combination of the sixth and seventh principles — which, after the period of unconscious gestation is reborn into the Deva-Chan, is of necessity as innocent and pure as a new-born babe. The fact of his being reborn at all, shows the preponderance of good over evil in his old personality. And while the Karma (of evil) steps aside for the time being to follow him in his future earth-reincarnation, he brings along with him but the Karma of his good deeds, words, and thoughts into this Deva-Chan. "Bad" is a relative term for us — as you were told more than once before, — and the Law of Retribution is the only law that never errs. Hence all those who have not slipped down into the mire of unredeemable sin and bestiality — go to the Deva Chan. They will have to pay for their sins, voluntary and involuntary, later on. Meanwhile, they are rewarded; receive the effects of the causes produced by them.

Of course it is a state, one, so to say, of intense selfishness, during which an Ego reaps the reward of his unselfishness on earth. He is completely engrossed in the bliss of all his personal earthly affections, preferences and thoughts, and gathers in the fruit of his meritorious actions.

The Personal Ego is given as "a combination of the five lower principles" on page 31 of this letter. 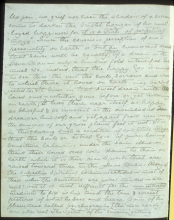 No pain, no grief nor even the shadow of a sorrow comes to darken the bright horizon of his unalloyed happiness: for, it is a state of perpetual "Maya" . . . Since the conscious perception of one's personality on earth is but an evanescent dream that sense will be equally that of a dream in the Deva-Chan — only a hundred fold intensified. So much so, indeed, that the happy Ego is unable to see through the veil, the evils, sorrows and woes to which those it loved on earth may be subjected to. It lives in that sweet dream with its loved ones — whether gone before, or yet remaining on earth; it has them near itself, as happy, as blissful and as innocent as the disembodied dreamer himself; and yet, apart from rare visions, the denizens of our gross planet feel it not. It is in this, during such a condition of complete Maya that the Souls or astral Egos of pure, loving sensitives, labouring under the same illusion, think their loved ones come down to them on earth, while it is their own Spirits that are raised towards those in the Deva-Chan. Many of the subjective spiritual communications — most of them when the sensitives are pure minded — are real; but it is most difficult for the uninitiated medium to fix in his mind the true and correct pictures of what he sees and hears. Some of the phenomena called psychography (though more rarely) are also real. The spirit of the sensitive getting

Psychography refers to automatic writing (rather than its modern definition as the study of personality, values, attitudes, interests, and lifestyles). 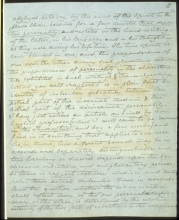 odylised, so to say, by the aura of the Spirit in the Deva-Chan, becomes for a few minutes that departed personality, and writes in the hand writing of the latter, in his language and in his thoughts, as they were during his life time. The two spirits become blended in one; and, the preponderance of one over the other during such phenomena determines the preponderance of personality in the characteristics exhibited in such writings, and "trance speaking." What you call "rapport" is in plain fact an identity of molecular vibration between the astral part of the incarnate medium and the astral part of the disincarnate personality. I have just noticed an article on smell by some English Professor (which I will cause to be reviewed in the Theosophist and say a few words), and find in it something that applies to our case. As, in music, two different sounds may be in accord and separately distinguishable, and this harmony or discord depends upon the synchronous vibrations and complementary periods; so there is rapport between medium and "control" when their astral molecules move in accord. And the question whether the communication shall reflect more of the one personal idiosyncracy, or the other, is determined by the relative intensity of the two sets of vibrations in the compound 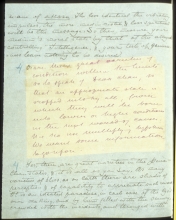 wave of Akasa. The less identical the vibratory impulses the more mediumistic and less spiritual will be the message. So then, measure your medium's moral state by that of the alleged "controlling" Intelligence, and your tests of genuineness leave nothing to be desired.

(4) Or are there great varieties of condition within the limits, so to speak, of Deva Chan, so that an appropriate state is dropped into by all, from which they will be born into lower and higher conditions in the next world of causes. It is no use multiplying hypotheses. We want some information to go upon.

(4) Yes; there are great varieties in the Deva-Chan states, and, it is all as you say. As many varieties of bliss, as on earth there are shades of perception and of capability to appreciate such reward. It is an ideated paradise, in each case of the Ego's own making, and by him filled with the scenery, crowded with the incidents, and thronged with