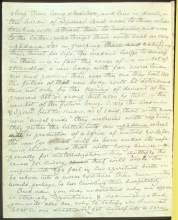 sleep their long slumber and live in dream in the bosom of Space! And woe to those whose Trishna will attract them to mediums, and woe to the latter, who tempt them with such an easy Upadana. For in grasping them, and satisfying their thirst for life, the medium helps to develop in them — is in fact the cause of — a new set of Skandhas, a new body, with far worse tendencies and passions than was the one they lost. All the future of this new body will be determined thus, not only by the Karma of demerit of the previous set or group but also by that of the new set of the future being. Were the mediums and Spiritualists but to know, as I said, that with every new "angel guide" they welcome with rapture, they entice the latter into an Upadana which will be productive of a series of untold evils for the new Ego that will be born under its nefarious shadow, and that with every seance — especially for materialization — they multiply the causes for misery, causes that will make the unfortunate Ego fail in his spiritual birth, or be reborn into a worse existence than ever — they would, perhaps, be less lavishing their hospitality.

And now, you may understand why we oppose so strongly Spiritualism and mediumship. And, you will also see, why, to satisfy Mr. Hume, — at least in one direction, — I got myself into a scrape