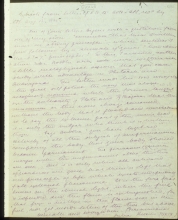 One of your letters begins with a quotation from one of my own . . . "Remember that there is within man no abiding principle" — which sentence I find followed by a remark of yours "How about the sixth and seventh principles?" To this I answer, neither Atma nor Buddhi ever were within man, — a little metaphysical axiom that you can study with advantage in Plutarch and Anaxagoras. The latter made his — nous autochrates — the spirit self-potent, the nous that alone recognised noumena while the former taught on the authority of Plato and Pythagoras that the denominer or this nous always remained without the body; that it floated and overshadowed so to say the extreme part of the man's head, it is only the vulgar who think it is within them . . . Says Buddha "you have to get rid entirely of all the subjects of impermanence composing the body that your body should become permanent. The permanent never merges with the impermanent although the two are one. But it is only when all outward appearances are gone that there is left that one principle of life which exists independently of all external phenomena. It is the fire that burns in the eternal light, when the fuel is expended and the flame is extinguished; for that fire is neither in the flame nor in the fuel, nor yet inside either of the two but above beneath and everywhere — (Parinirvana Sutra Kiouen XXXIX).

Plutarch was a Roman historian and biographer who was in accord with Plato's philosophy.

Anaxagoras was a Greek philosopher and scientist who introduced the concept of Nous (mind). 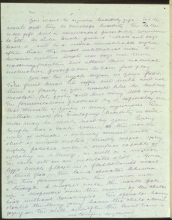 . . . You want to acquire gifts. Set to work and try to develop lucidity. The latter is no gift but a universal possibility common to all. As Luke Burke puts it "idiots and dogs have it, and to a more remarkable degree often than the most intellectual men. It is because neither idiots nor dogs use their reasoning faculties but allow their natural instinctive perceptions to have full play."

. . . You use too much sugar in your food. Take fruit bread tea coffee and milk and use them as freely as you would like to, but no chocolate, fat, pastry and but very little sugar. The fermentation produced by it especially in that climate of yours is very injurious. The methods used for developing lucidity in our chelas may be easily used by you. Every temple has a dark room, the north wall of which is entirely covered with a sheet of mixed metal, chiefly copper, very highly polished, with a surface capable of reflecting in it things, as well as a mirror. The chela sits on an insulated stool, a three-legged bench placed in a flat-bottomed vessel of thick glass, — the lama operator likewise, the two forming with the mirror wall a triangle. A magnet with the North Pole up is suspended over the crown of the chela's head without touching it. The operator having started the thing going leaves the chela alone gazing on the wall, and after the third time is no longer required.

Luke Burke may refer to a British Anthropologist, member of the first Anthropological Society of London that existed from 1837 to 1842. He published Ethnological Journal in 1848.