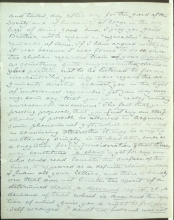 and toiled, day after day, for the good of the Society and of humanity at large in the only hope of doing good. And, I pray you, good Brother, not to regard as "reproaches" any simple remarks of mine. If, I have argued with you, it was because I was forced to do so, since the Chohan regarded them (your suggestions) as something quite unprecedented; claims, in his position, not to be listened to for one moment. Though you may now regard the arguments directed against you in the light of "undeserved reproaches," yet you may recognise some day, that you were really "wanting unreasonable concessions." The fact that, your pressing proposals, that you — (not anyone else) — should, if possible be allowed to acquire some phenomenal gift, which would be used in convincing others, — though it may be accepted as standing simply, in its dead letter sense "as a suggestion for (my) consideration" and that it, "in no way constituted a claim" — yet for anyone who could read beneath the surface of the lines, it appeared as a definite claim, indeed. I have all your letters, and there is hardly one that does not breathe the spirit of a determined claim, a deserved request, i.e., a demand of that which is due and the rejection of which gives you a right to feel yourself wronged. I doubt not, that such was not