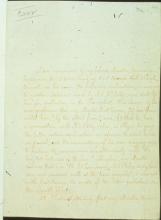 I am commanded by my beloved Master, known in India and the Western lands as Koot Hoomi Lal Singh, to make in his name the following declaration, in answer to a certain statement made by Mr. W. Oxley, and sent by him for publication in the Theosophist. It is claimed by the said gentleman that my Master Koot Hoomi (a) has thrice visited him "by the astral form"; and (b) that he had a conversation with Mr. Oxley when, as alleged he gave the latter certain explanations in reference to astral bodies in general, and the incompetency of his own Mayavy-rupa to preserve its consciousness simultaneously with the body "at both ends of the line" — therefore my Master declares that: — 1. Whomsoever Mr. Oxley may have seen and conversed with at the time described, it was not with Koot Hoomi, the writer of the letters published in the Occult World.

2. Notwithstanding that my Master knows

a certain statement refers to an article published in the The Theosophist on September, 1882, pages 298-303, entitled "The Philosophy of Spirit - Hierosophy, Theosophy, and Psychosophy". 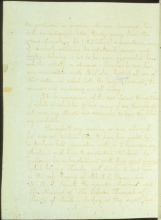 the gentleman in question who once honoured him with an autograph letter, thereby giving him the means of making his (Mr. Oxley's) acquaintance and of sincerely admiring his intuitional powers and western learning — yet he has never approached him whether astrally or otherwise: Nor has he ever had any conversation with Mr. Oxley, least of all one of that nature in which both the subject and predicate, the premises and conclusions are all wrong.

3. In consequence of the said claims, the repetition of which is calculated to lead many of our theosophists into error, my Master has determined to issue the following resolution.

Henceforth any medium or seer who will feel disposed to claim either to have been visited by, or to have held conversation with, or to have seen my Master, — will have to substantiate the claim by prefixing his or her statement with THREE SECRET WORDS, which he, my Teacher, will divulge to and leave in the safe keeping of Mr. A. O. Hume, and Mr. A. P. Sinnett the respective President and Vice-President, of "The Eclectic Theosophical Society" of Simla. As long as they do not find 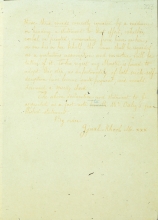 these three words correctly repeated by a medium or heading a statement to that effect, whether verbal or printed, emanating from him or her, or on his or her behalf, the claim shall be regarded as a gratuitous assumption and no notice will be taken of it. To his regret my Master is forced to adopt this step, as unfortunately of late such self-deception have become quite frequent, and would demand a speedy check.

The above declaration and statement to be appended as a footnote to Mr. Oxley's published statement.