At this stage of our correspondence, misunderstood as we generally seem to be, even by yourself, my faithful friend, it may be worth our while and useful for both, that you should be posted on certain facts — and very important facts — connected with adept-ship. Bear in mind then, the following points.

[1] An adept — the highest as the lowest — is one only during the exercise of his occult powers.

[2] Whenever these powers are needed, the sovereign will unlocks the door to the inner man [the adept] who can emerge and act freely but on condition that his jailor — the outer man will be either completely or partially paralyzed — as the case may require; viz: either (a) mentally and physically; (b) mentally, — but not physically; (c) physically but not entirely mentally; (d) neither, — but with

viz. represents the Latin adverb videlicet which means "namely", "that is to say", or "as follows".

an akasic film interposed between the outer and the inner man.

[3] The smallest exercise of occult powers then, as you will now see, requires an effort. We may compare it to the inner muscular effort of an athlete preparing to use his physical strength. As no athlete is likely to be always amusing himself at swelling his veins in anticipation of having to lift a weight, so no adept can be supposed to keep his will in constant tension and the inner man in full function, when there is no immediate necessity for it. When the inner man rests the adept becomes an ordinary man, limited to his physical senses and the functions of his physical brain. Habit sharpens the intuitions of the latter, yet is unable to make them supersensuous. The inner adept is ever ready, ever on the alert, and that suffices for our purposes. At moments 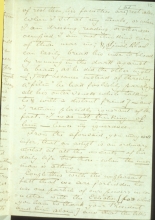 of rest then, his faculties are at rest also. When I sit at my meals, or when I am dressing, reading or otherwise occupied I am not thinking even of those near me; and, Djual Khool can easily break his nose to blood, by running in the dark against a beam, as he did the other night — (just because instead of throwing a "film" he had foolishly paralyzed all his outer senses while talking to and with a distant friend) — and I remained placidly ignorant of the fact. I was not thinking of him — hence my ignorance.

From the aforesaid, you may well infer, that an adept is an ordinary mortal, at all the moments of his daily life but those — when the inner man is acting.

that is done, is, so to say, smuggled in — and then syllogize thusly —

K.H. when writing to us is not an adept.

Mistakes of punctuation — that will often change entirely the whole sense of a sentence; idiomatic mistakes — very likely to occur especially when writing as hurriedly as I do; mistakes arising from occasional confusion of terms that I had to learn from you — since it is you who are the author of "rounds" — "rings" — "earthly rings" — etc. etc. Now with all this, I beg leave to say, that after having carefully read over and over our "Famous Contradictions" myself; after giving them to be read to M.; and then to a high adept whose powers are not in the Chohan's chancery sequestered by Him to prevent him from squandering them

chancery usually means the building that houses a diplomatic mission, such as an embassy.

upon the unworthy objects of his personal predilections; after doing all this I was told by the latter the following: "It is all perfectly correct. Knowing what you mean, no more than any other person acquainted with the doctrine, can I find in these detached fragments anything that would really conflict with each other. But, since many sentences are incomplete, and the subjects scattered about without any order, I do not wonder that your "lay chelas" should find fault with them. Yes; they do require a more explicit and clear exposition."

Such is the decree of an adept — and I abide by it; I will try to complete the information for your sake.

[12A], and [12B] the last — is the "plaintiff" entitled to a hearing, but not to a farthing even — for damages; since, as in law, no one — either plaintiff or defendant — has a right to plead ignorance of that law, so in Occult Sciences, the lay chelas ought to be forced to give the benefit of the doubt to their gurus in cases, in which, owing to their great ignorance of that science they are likely to misinterpret the meaning — instead of accusing them point blank of contradiction! Now I beg to state, that, with regard to the two sentences — marked respectively 12A and 12B — there is a plain contradiction but for those who are not acquainted with that tenet; you were not, and therefore I plead "guilty" of an omission, but "not guilty" of a contradiction. And even as regards the former, that omission is so small that, like the girl accused of infanticide, who when brought before 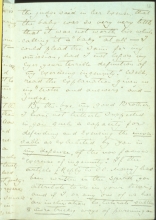 the Judge said in her excuse that the baby was so very very little that it was not worth his while calling it a "baby" at all — I could plead the same for my omission, had I not before my eyes your terrible definition of my "exercising ingenuity." Well, read the explanation given in my "Notes and Answers" and judge.

By the bye, my good Brother, I have not hitherto suspected in you such a capacity for defending and excusing the inexcusable as exhibited by you in my defense, of the now famous "exercise of ingenuity." If the article [reply to C. C. Massey] has been written in the spirit you attribute to me in your letter; and if I, or any one of us has "an inclination to tolerate subtler and more tricksy ways of pursuing an

end" than generally admitted as honourable by the truth-loving, straight-forward European (is Mr. Hume included in this category?) — indeed you have no right to excuse such a mode of dealing, even in me; nor to view it "merely in the nature of spots in the sun," since a spot is a spot whether found in the bright luminary or upon a brass candlestick. But you are mistaken, my dear friend. There was no subtle, no tricky mode of dealing, to get her out of the difficulty created by her ambiguous style and ignorance of English, not her ignorance of the subject — which is not the same thing and alters entirely the question. Nor was I ignorant of the fact that M. had written to you previously upon the subject since it was in one of his letters [the last but one before I took the business off his hands] in which he

touched upon the subject of "races" for the first and spoke of reincarnations. If M. told you to beware trusting Isis too implicitly, it was because he was teaching you truth and fact — and that at the time the passage was written we had not yet decided upon teaching the public indiscriminately. He gave you several such instances — if you will but re-read his letter — adding that were such and such sentences written in such a way they would explain facts now merely hinted upon, far better.

Of course to "C.C.M." the passage must seem wrong and contradictory for it is "misleading" as M. said. Many are the subjects treated upon in Isis that even H.P.B. was not allowed to become thoroughly acquainted with; yet they are not contradictory if — "misleading." To make her say — as she was made by me to say — that the passage criticized was "incomplete, chaotic, vague . . . clumsy as many more passages in that work"

to beware trusting Isis refers to a note the Master M. wrote saying "By-the-bye, I’ll re-write for you pages 345 to 357, Vol. I., of Isis". The questionable passages have to do with the denial of the existence of reincarnation in Isis Unveiled.

to "C.C.M." is a reference to an article published in the English Spiritualist periodical Light, in July 8, 1882 by C. C. Massey, criticizing those "discrepancies" in Isis Unveiled.

was a sufficiently "frank admission" I should think, to satisfy the most crotchetty critic. To admit "that the passage was wrong," on the other hand, would have mounted to a timeless falsehood, for I maintain that it is not wrong; since if it conceals the whole truth, it does not distort it in the fragments of that truth as given in Isis. The point in C.C.M.'s complaining criticism was not that the whole truth had not been given, but that the truth and facts of 1877 were represented as errors and contradicted in 1882 and it was that point — damaging for the whole Society, its "lay" and inner chelas, and for our doctrine — that had to be shown under its true colours; namely that of an entire misconception due to the fact that the "septenary" doctrine had not yet been divulged to the world at the time when Isis was written. And thus it was shown. I am sorry you do not find her answer

By Barker: №24-B
People involved
Written by: Mahatma K.H.
Received by: A.P. Sinnett
Dates
Written on: mid-September, 1882
Places
Sent from: quite near to Darjeeling, India
Received at: Shimla, India
Origin on the site: http://theosophy.wiki/en/Mahatma_Letter_No._85b
Pages