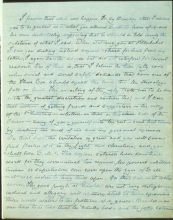 I foresaw that which now happens. In my Bombay letter I advised you to be prudent as to what you allowed S.M. to learn of + and his own mediumship, suggesting that he should be told merely the substance of what I said. When, watching you at Allahabad I saw you making instead copious extracts for him from my letter, I again saw the danger but did not interfere for several reasons. One of them is, that I believe the time fully come when social and moral safety demands that someone of the Theos. Soc. should speak the truth though the Himalaya fall on him. The unveiling of the ugly truth has to be done with the greatest discretion and caution though; and I see that instead of getting friends and supporters in the camp of the Philistines — whether on that or this side of the Oceans — many of you — yourself with the rest — breed but enemies by making too much of me and my personal opinions. On that side, the irritation is great and you will soon find flashes of it in the Light and elsewhere; and, you "shall lose S.M." The copious extracts have done their work for they were — much too copious. No powers whether human or super-human can ever open the eyes of S.M. — it was useless to tear them open. On this side — it is still worse. The good people at Simla are not very metaphorically inclined and allegory will no more stick to their epidermis than would water to the feathers of a goose. Besides, — no one likes to be told that he "smells bad" and the joke extracted

"the Light" refers to The Banner of Light, a Spiritualist newspaper founded by Luther Colby of Boston in 1857. See note here. 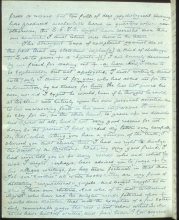 from a remark but too full of deep psychological meaning has produced incalculable harm in quarters where otherwise, the S.E.T.S. might have recruited more than one convert. . . . I must return once more to the letter.

The strongest basis of complaint against me is the fact that my statement implies (a) a kind of challenge to S.M. to prove + a "Spirit" — (b) I am severely denounced by our friend for making out + — a liar. Now, I mean to be explanatory but not apologetic. I most certainly meant both; only I meant it for you, who had asked me for the information, by no means for him. He has not proved his case, nor did I expect he would, even if he thought he could, as the claim rests entirely upon his own personal assertion due to his unwavering faith in his own impressions. It would be easy for me, on the other hand, to prove + no disembodied Spirit at all, had I not very good reasons for not doing so at present. I had worded my letter very carefully, so, that, while letting you have a glimpse of the truth, I showed you most clearly that I had no right to divulge the "secret of a Brother." But, my very good friend, I had never told you in so many words who and what he was. I might, perhaps, have advised you to judge + by his alleged writings, for more fortunate in that than Job, our "enemies" "all write books." They are very fond of dictating inspirational gospels and so — get caught at the glue of their own rhetorics. And who of the most intellectual Spirit[ualis]ts who have read the complete works fathered upon + would dare maintain that with the exception of a few extremely remarkable pages the rest is not below what S.M. could have himself written, and far better? Rest assured 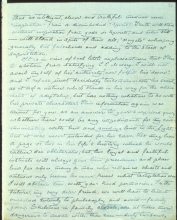 that no intelligent, clever and truthful medium needs "inspiration" from a disembodied "Spirit." Truth will stand without inspiration from Gods or Spirits, and better still — will stand in spite of them all; "angels" whispering generally but falsehoods and adding to the stock of superstition.

It is in view of such little unpleasantnesses that I have to abstain from satisfying C. C. Massey. I will not avail myself of his "authority," nor fulfil his "desire," and I refuse most decidedly to "communicate his secret" as it is of a nature which stands in his way for the attainment of adeptship, but has nothing whatever to do with his private character. This information again was meant for you, as an answer to your surprised query whether there could be any impediments for my communicating with him and guiding him to the Light, but it was never intended for his ears. He may have a page or two in his life's history which he would rather see obliterated; but, his loyal and faithful instincts will always give him precedence and place him far above many a man who remained chaste and virtuous only because he never knew what temptation was. I will abstain, then, with your kind permission. In the future, my very dear friend, we will have to limit ourselves entirely to philosophy and avoid — family gossip. Skeletons in family closets, are at times, more dangerous to meddle with, than even — dirty turbans, 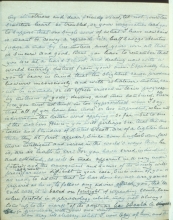 my illustrious and dear friend. And let not your too sensitive heart be troubled, or your imagination lead you to suppose that one single word of what I have now said is meant to convey a reproach. We, half savage Asiatics judge a man by his motives, and yours were all that is sincere and good. But you have to remember that you are at a hard school, and dealing now with a world entirely distinct from your own. Especially have you to bear in mind that the slightest cause produced, however unconsciously, and with whatever motive, cannot be unmade, or its effects crossed in their progress — by millions of gods, demons, and men combined. Therefore, you must not think me too hypercritical when I say, that all of you have been more or less imprudent, when not indiscreet — the latter word applying — so far — but to one of the members. Hence — you will perhaps see, that the mistakes and blunders of H. Steel Olcott, are of a lighter hue than they at first appear, since even Englishmen, far more intelligent and versed in the world's ways than he is, are as liable to err. For you have erred, individually and collectively, as will be made apparent in a very near future; and the management and success of the Society will prove as a result far more difficult in your case, since none of you is as ready to admit that he has done so, nor are you as prepared as he is, to follow any advice offered you, though in each case, it is based on foresight of impending events, even when foretold in a phraseology which may not always come "up to the mark" of the adept — as he should be in accordance with your own views.

You may tell Massey what I now say of him, and the 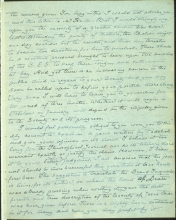 reasons given. You may — though I would not advise you — read this letter to Mr. Hume. But I would strongly urge upon you the necessity of a greater caution than ever. Notwithstanding the purity of motives, the Chohan might one day consider but the results, and these may threaten to become too disastrous for him to overlook. There should be a constant pressure brought to bear upon the members of the S.E.S. to keep their tongues and enthusiasm at bay. And yet there is an increasing concern in the public mind, in regard to your Society and you may soon be called upon to define your position more clearly. Very soon I will have to leave you to yourselves for the period of three months. Whether it will begin in October or January will depend on the impulse given to the Society and its progress.

I would feel personally obliged to you were you to kindly consent to examine a poem written by Padshah, and give your opinion on its merits. I believe it too long for the Theosophical Journal, nor do its literary merits warrant exactly or justify the claim. However, I leave it to your better judgment. I am anxious that the Journal should be more successful this year than it has heretofore been. The suggestion to translate the Grand Inquisitor is mine; for its author, on whom the hand of Death was already pressing when writing it, gave the most forcible and true description of the Society of Jesus than was ever given before. There is a mighty lesson contained in it for many and even you may profit by it.

S. J. Padshah was a member who on August 27, 1881, published in The Bombay Gazette a statement entitled "The Theosophists andThe Occult World" vouching for the existence of the Masters of the Wisdom claiming he had seen "more than one of them" and that he was a disciple of Master K.H.

The Grand Inquisitor is a parable in Fyodor Dostoyevsky's novel The Brothers Karamazov (1879–1880).

The Society of Jesus is a Catholic male religious order whose members are known as "Jesuits". 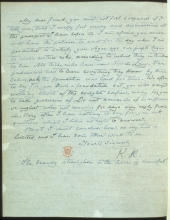 My dear friend, you must not feel surprised if I tell you, that I really feel weary and disheartened at the prospect I have before me. I am afraid you never will have the patience to wait for the day when I am permitted to satisfy you. Ages ago our people began to make certain rules, according to which they intended to live. All these rules have now become LAW. Our predecessors had to learn everything they know by themselves, only the foundation was laid for them. We offer to lay for you such a foundation but you will accept nothing short of the complete edifice, ready for you to take possession of. Do not accuse me of indifference or neglect when not receiving for days any reply from me. Very often I have nothing to say, for you ask questions which I have no right to answer.

But I must conclude here, as my time is limited and I have some other work to do.

The brandy atmosphere in the house is dreadful.