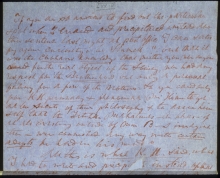 If you are so anxious to find out the particular spot where I erased and precipitated instead another sentence last night at post-office I can satisfy your curiosity Mr. Sinnett, "but that it was the Chohan's KNOWLEDGE that neither you nor anyone cared for the real object of the Society, nor had any respect for the BROTHERHOOD but only a personal feeling for a few of the Brothers. So you cared only for K.H. personally and phenomena; Mr. Hume to get at the secrets of their philosophy and to assure himself that the Tibetan Mahatmas — the Lhas — if at all existing outside of Mme. B.'s imagination — were connected any way with certain adepts he had in his mind."

All this is what K.H. said, what I had to write and precipitate instead of that 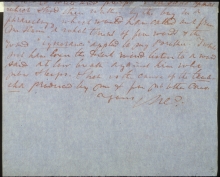 which stood then written by the boy in a phraseology which would have called out from Mr. Hume a whole torrent of fine words and the word "ignorance" applied to my Brother. I would not have even the desert wind listen to a word said at low breath against him who now sleeps. Such is the cause of the tamacha produced by me and for no other cause.

Tamacha or tamasha is a psychic illusion. The word literally means "a spectacle; entertainment."