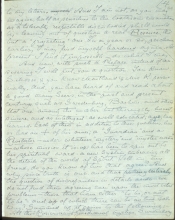 to my letters. And I am not, as you may imagine, half as sensitive to the loathsome emanations as a tolerably respectable disembodied shellwould be, — leaving out of question a real PRESENCE, though but a "projecting" one. In a year or so, perchance earlier, I may find myself hardened again. At present I find it impossible — do what I may.

And now, with such a Preface instead of answering I will put you a question. You know, S. Moses, and you know Maitland and Mrs. K. personally. And, you have heard of and read about a good many Seers, in the past and present centuries, such as Swedenborg, Boehme, and others. Not one among the number but thoroughly honest, sincere, and as intelligent, as well educated; aye, even learned. Each of them in addition to these qualities, has or had an + of his own; a "Guardian" and a Revelator — under whatever "mystery" and "mystic name" — whose mission it is — or has been to spin out to his spiritual ward — a new system embracing all the details of the world of Spirit. Tell me, my friend, do you know of two that agree? And why, since truth is one, and that putting entirely the question of discrepancies in details aside — we do not find them agreeing even upon the most vital problems — those that have either "to be, or not to be" — and of which there can be no two solutions? Summed up, it comes to the following: —

All the "Rosicrucians," all the mediaeval mystics, Swedenborg,