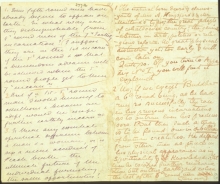 (1) The natural-born Seers and clairvoyants of Mrs. A. Kingsford's and Mr. Maitland's types; the great adepts of whatsoever country; the geniuses — whether in arts, politics or religious reform. No great physical distinction yet: too early and will come later on.

Quite so. If you turn to Appendix No. I you will find it explained.

(2) But if a 1st-5th round man devoted himself to occultism and became an adept, would he escape further earthly incarnations?

(2) No; if we except Buddha — a sixth round being, as he had run so successfully the race in his previous incarnations as to outrun even his predecessors. But then such a man is to be found in a billion of human creatures. He differed from other men as much in his physical appearance as in spirituality and knowledge. Yet even he escaped further reincarnations but on this earth; and, when the last of the sixth round men 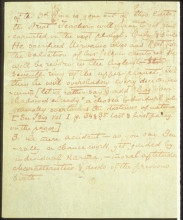 of the third ring is gone out of this earth, the Great Teacher will have to get reincarnated on the next planet. Only, and since He sacrificed Nirvanic bliss and Rest for the salvation of his fellow creatures He will be re-born in the highest — the seventh ring of the upper planet. Till then He will overshadow every decimillenium (let us rather say and add "has overshadowed already" a chosen individual who generally overturned the destinies of nations. See Isis, Vol. I, pp. 34 and 35 last and first para. on the pages).

(3) Is there any essential spiritual difference between a man and a woman, or is sex a mere accident of each birth — the ultimate future of the individual furnishing the same opportunities?

(3) A mere accident — as you say. Generally a chance work yet guided by individual Karma, — moral aptitudes, characteristics and deeds of a previous birth. 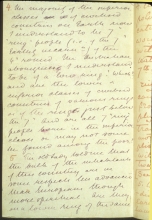 (4) Not necessarily. Refinement, polishedness, and brilliant education, in your sense of these words have very little to do with the course of higher Nature's Law. Take a seventh ring African or a fifth ring Mongolian and you can educate him — if taken from the cradle — save his physical appearance, and transform him into the most brilliant and accomplished English lord. Yet, he will still remain, but an outwardly intellectual parrot. (See Appendix No. II).

(5) The Old Lady told me that the bulk of the inhabitants of this country are in some respects less advanced than Europeans though more spiritual. Are they on a lower ring of the same round — or does the difference refer to some principle of national cycles which has nothing to do with individual progress?

(5) Most of the peoples of India belong to the oldest or the earliest branchlet of the fifth human Race. I have desired

M. to end his letter to you with a short summary of the last scientific theory of your learned Ethnographers and Naturalists, to save myself work. Read what he writes and then turn to No. III of my Appendix.

His letter to you with a short summary... Daniel Caldwellproposes that this letter is Mahatma Letter No. 46, which was misdated. 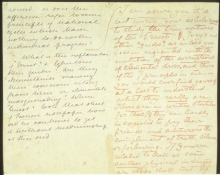 What is the explanation of "Ernest" and Eglinton's other guide? Are they elementaries drawing their conscious vitality from him or elementalsmasquerading? When "Ernest" took that sheet of "Pioneer" notepaper how did he contrive to get it without mediumship at this end?

I can assure you it is not worth your while now to study the true natures of the "Ernests" and "Joeys" and "other guides" as unless you become acquainted with the evolution of the corruptions of elemental dross, and those of the seven principles in man — you would ever find yourself at a loss to understand — what they really are; there are no written statutes for them, and they can hardly be expected to pay their friends and admirers the compliment of truth, silence or forbearing. If 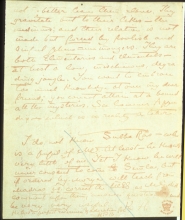 some are related to them as some soulless physical mediums are — they shall meet. If not — better leave them alone. They gravitate but to their likes — the mediums; and their relation is not made but forced by foolish and sinful phenomena-mongers. They are both elementaries and elementals — at best a low, mischievous, degrading jangle. You want to embrace too much knowledge at once, my dear friend; you cannot attain at a bound all the mysteries. See however Appendix — which is in reality a letter.

I do not know Subba Rao — who is a pupil of M. At least — he knows very little of me. Yet I know, he will never consent to come to Simla. But if ordered by Morya will teach from Madras, i.e., correct the MSS. as M. did, comment upon them, answer questions, and be very, very useful. He has a perfect reverence and adoration for — H.P.B.