You have got a vision of seven manifestations of Hierarchy. It is not merely a sign of reality of the Higher Beings. It’s a sign of your ability to become homogeneous with Them. When the Hierarchy Beings reveal Themselves, They initiate you into Them. They may be called as the entities of your Soul. 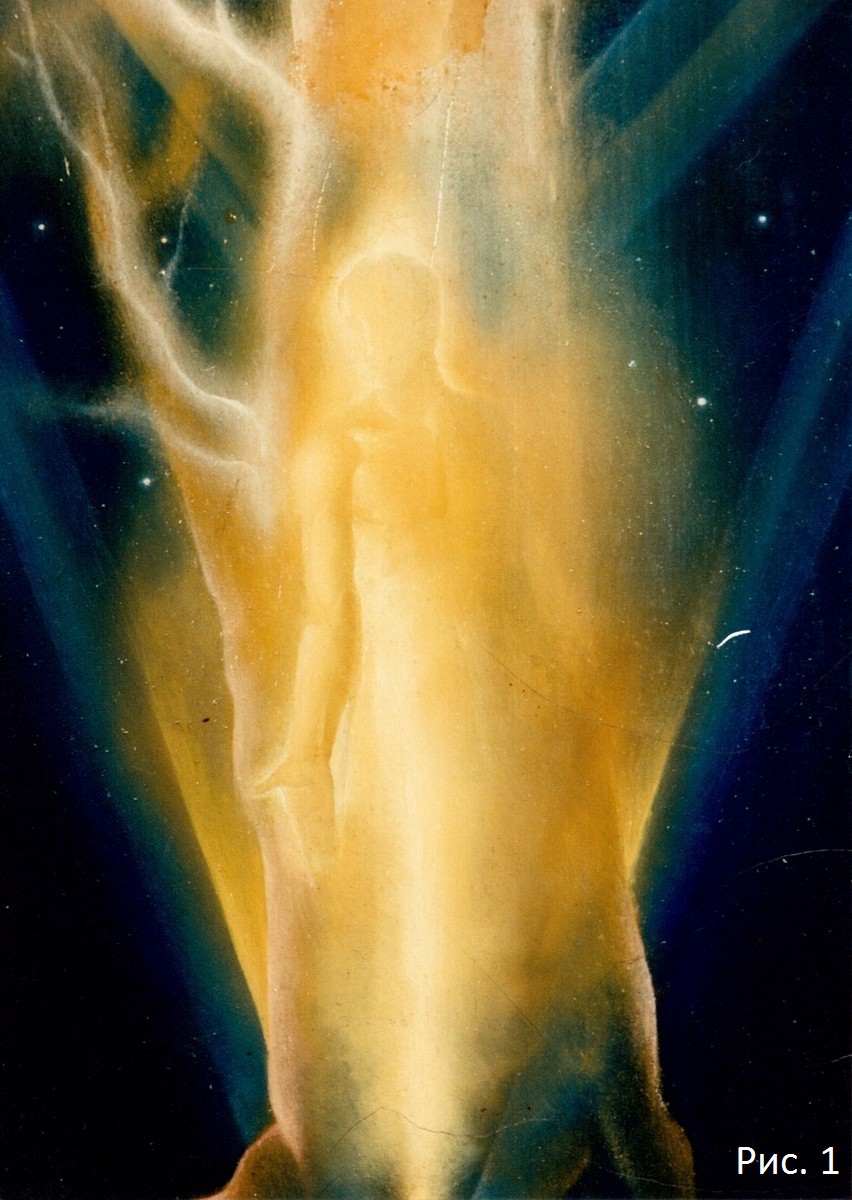 They show Themselves to you when you are ready to receive intensive initiating energies. It takes long time for the corresponding chakra to adapt to the intensive vibration of these currents, that is, build up antahkarana until due to the regime of reverential service it gets ready to turn into the vehicle of Hierarchy Soul, the centre of Hierarchy Being. That is how the process of building up Antahkarana looks like.

Visualizing Hierarchy Beings on every energy level you can do an ascending meditation. Here you have your quiet mind meditating. It is attending, revering. It is receiving the lucidity and now you see the Solar Angel saving you. (Pic. 1)

Then you have your open throat center meditating without the tension of its own. You speak not on behalf of your own self. You perform an action but it is not you who acts. You are the gesture of the Higher, and Mother of Stone crushes into you with all the force of Her might. Immediately there dashes into you the Angel of intensive creational activity. (Pic. 2) 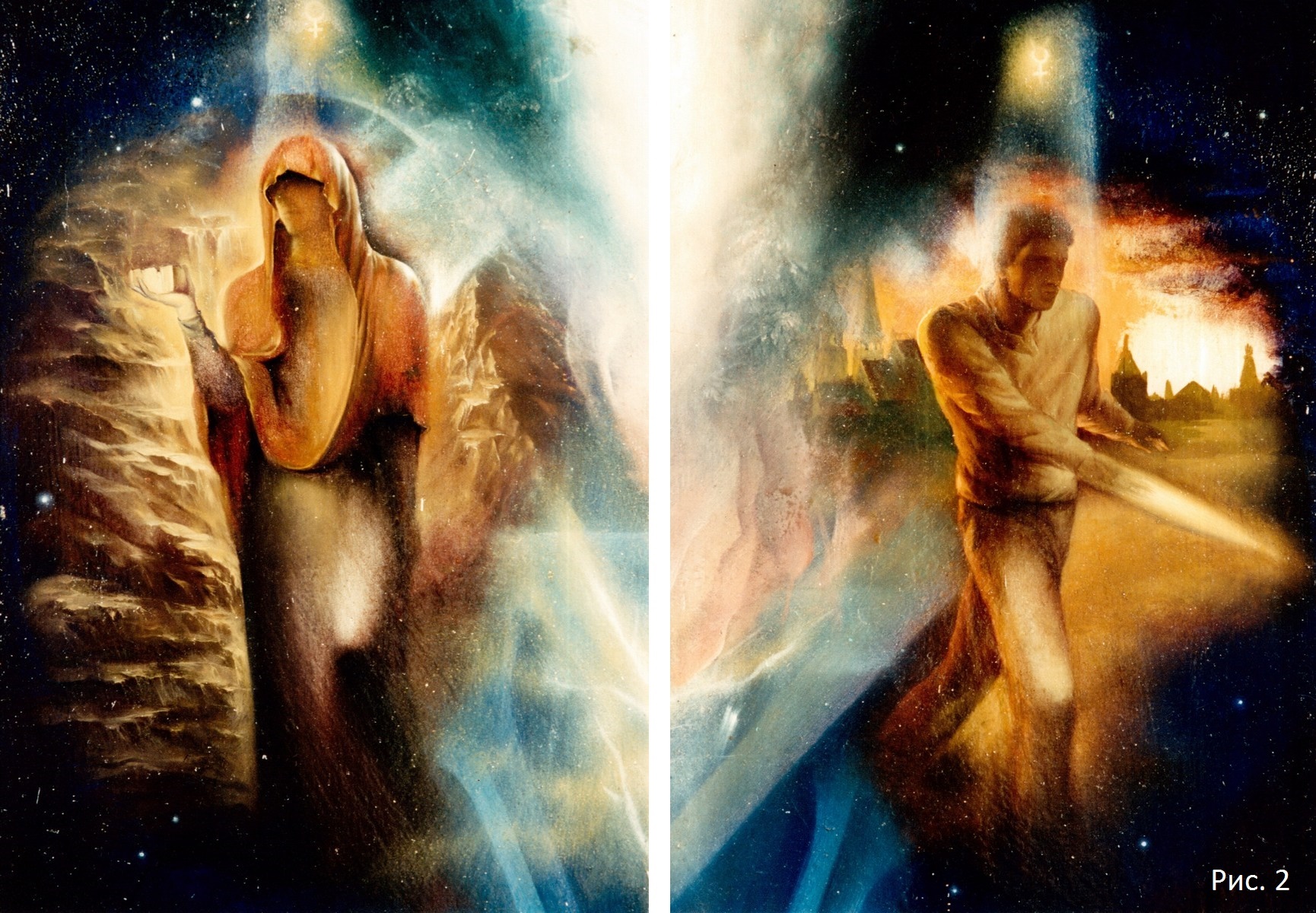 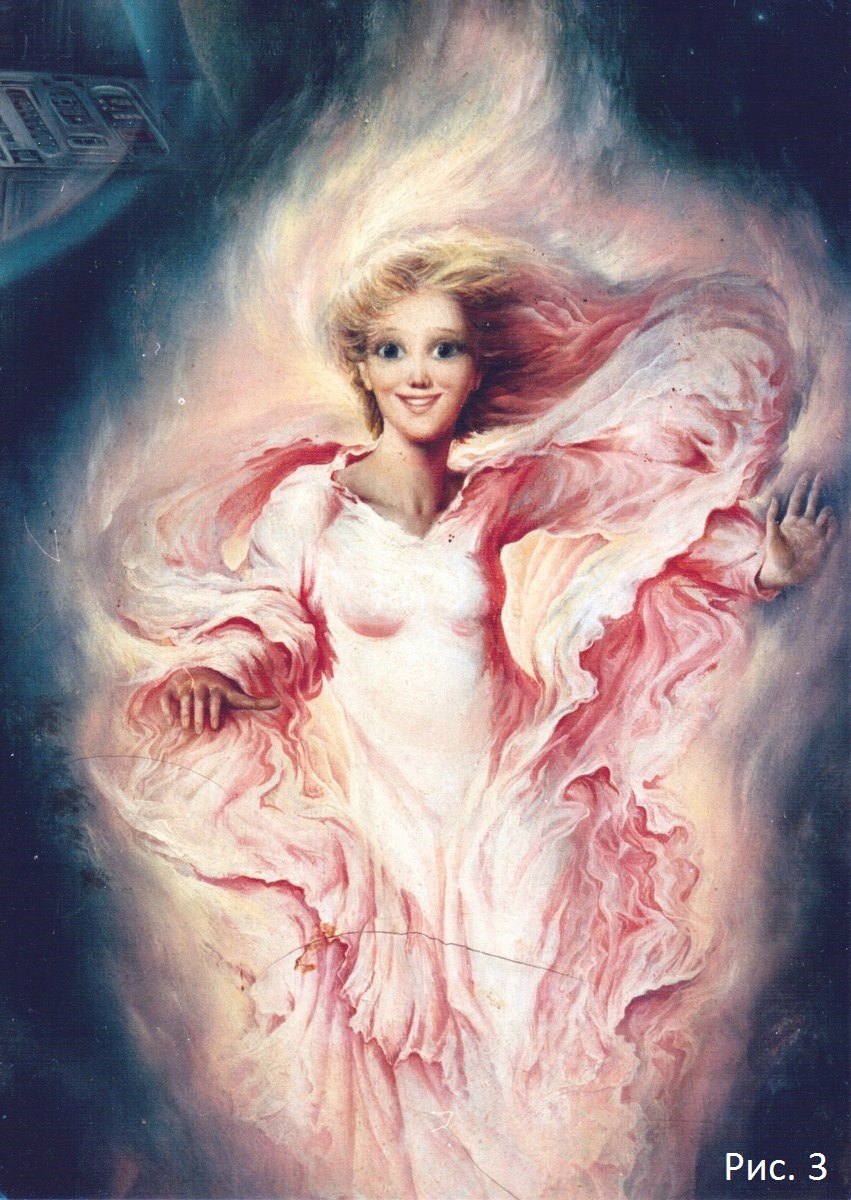 You meditate with your heart, you pray, and in an instant Mother-of God's Origin of intensive fiery Love flies right into this center-lotus. (Pic. 3)

Your chakra of solar plexus opens up, its will totally and naturally devoted to the Masters – and Mother's of Shine eyes, approaching, now flow into your eyes and the piercing stare of the Master remembers you for always. (Pic. 4) 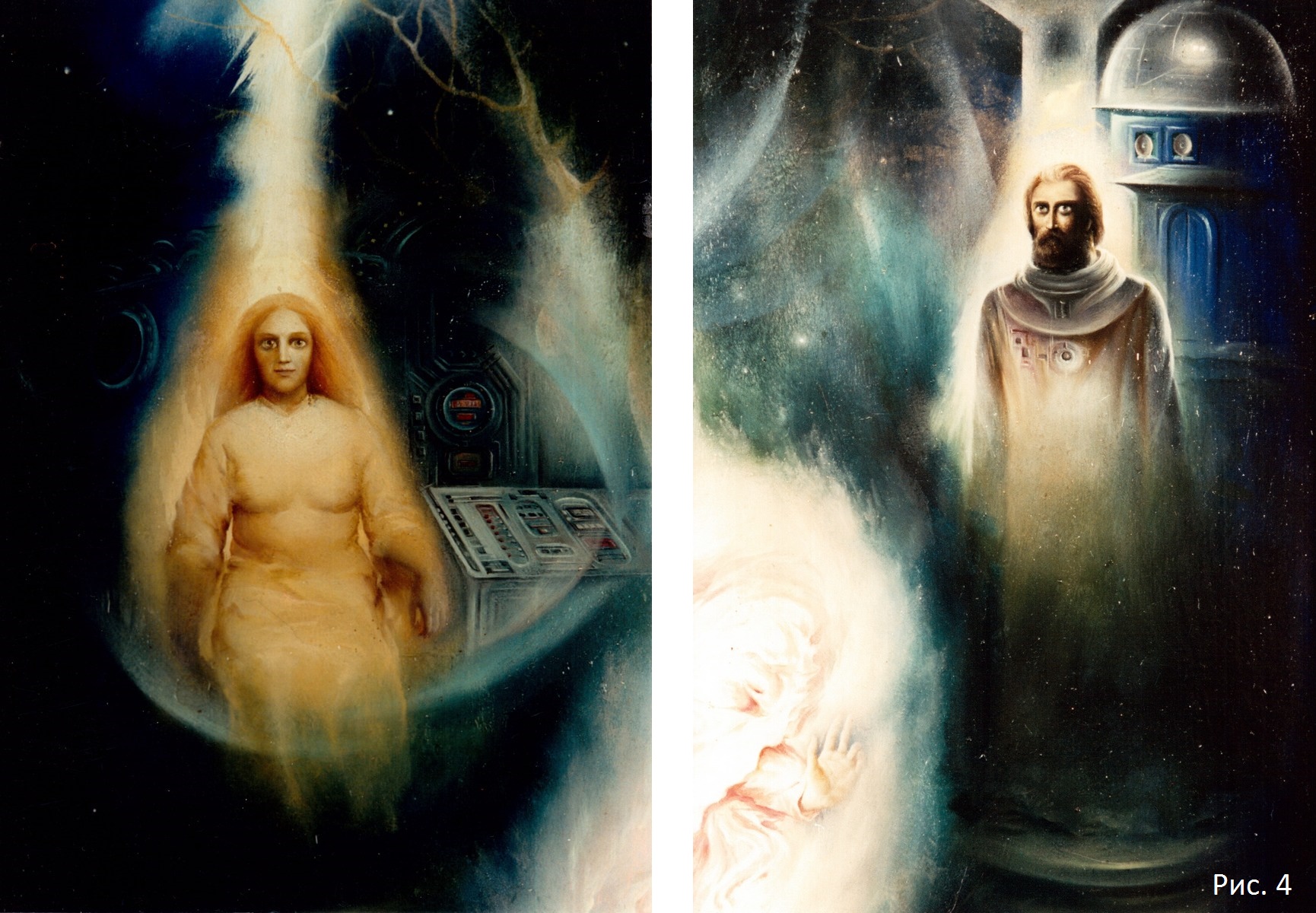 With your sacral chakra you meditate on the Higher couple Love – and the glorious Couple Being is shining high above, and you – a little girl (with a bowl of life-giving water) running up on the entire Antahkarana as if throwing forth its thread in front of you. You burst into the Higher couple Entity in your total devotion. (Pic. 5) 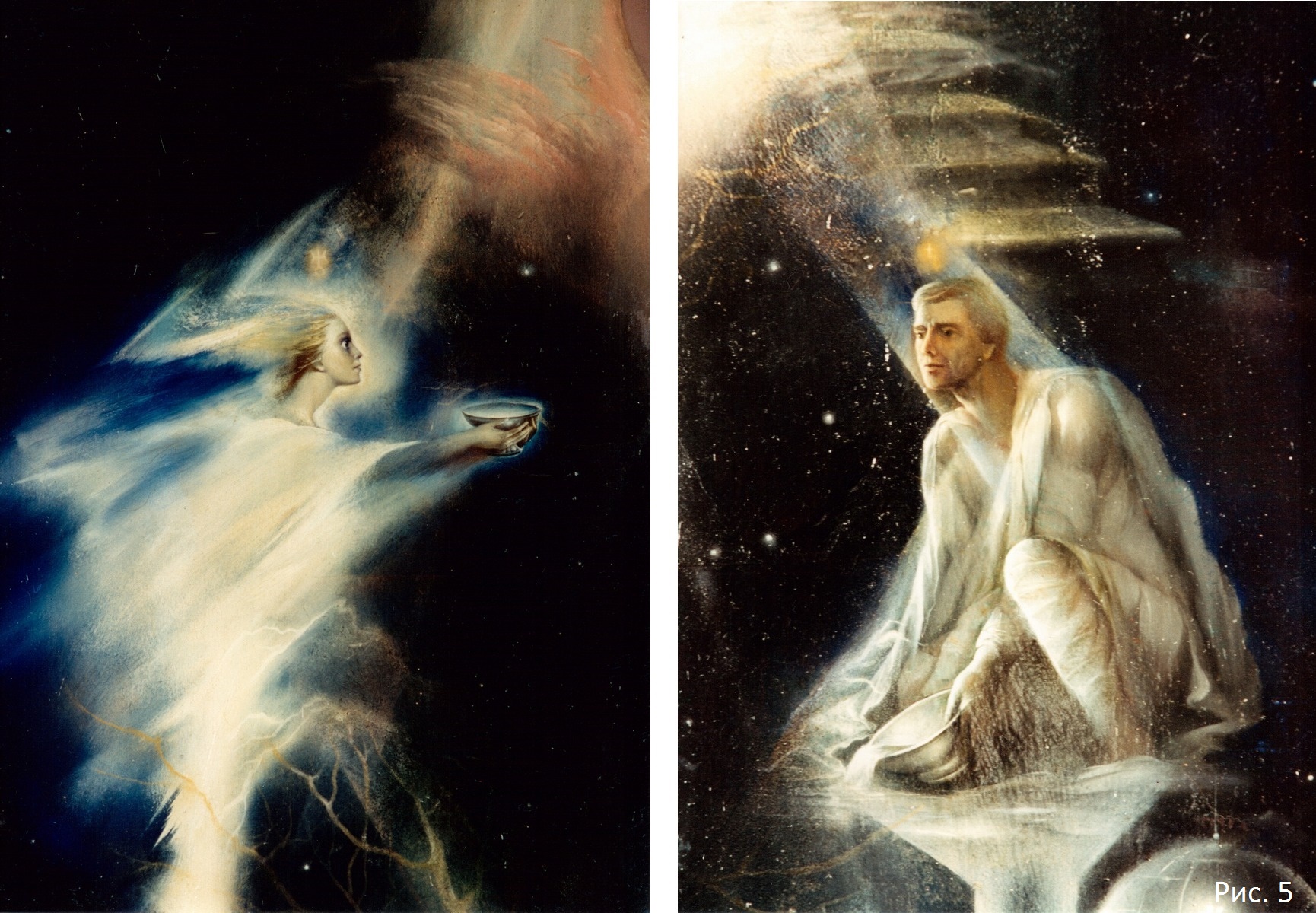 And then Mother Kali. When She holds you in Her arms, She flows in, embracing.

There’s the higher sense to labour and live under these energies and not allow yourself to be anything but this. You have essentially become It – What comes into you. Now you know how to recall correctly, how to be open and receive the flow – and close up the ring.

As the Ego of Absolute origin I don't allow my mind be active if it is not of an Angel's. At any time my mind is activized only in case it becomes the centre working in an ascending regime.

My throat center “switches in” only as the “throat” of the Mother. I begin speaking only when I am Mother of Stone, and set on the same line with the intensive Warrior.

I reveal myself in action, in my will impulse only when the ring of Higher vitality is closed up, only when I hear the Sound of the Master of Will passing through myself. Only Him and Mother of Shine – impassive and immutable – do I reveal.

I allow myself a sacral impulse only if this move is directed by Mother of Lightning and Her Highest Couple – by energies of the Two who die into Each Other, into Great Love.

I allow myself to live only when I am the whole one with Mother Kali in Her total devotion to God.

If you ever experienced this, there is sense in meditating on the saying: “If I am not a Soul of Hierarchy then what am I?” You are either a human being, or you are the Soul. Either yours seven chakras work in a vertical regime or they work horizontally. You consider yourself ordinary people? That’s a pity. It is not self-conceit. It is homogeneity with the Higher Beings. Once Higher Light comes to you – don't allow yourself to live the old way.

"The Tree Of Life. Burning Bush"